I'll Try to Fix You

I'll Try to Fix You

It's New Year's Eve and there is a party at the offices of News Night. Will McAvoy is sitting alone in his office when MacKenzie McHale asks him to speak to her boyfriend Wade Campbell about facts for a story from his work as a prosecutor. Jim Harper is in the middle of the party working on overlooked stories of the past year for Will, and Neal Sampat is trying to convince him (and everyone else) to run a story on the true existence of Bigfoot. Maggie Jordan comes over to help Jim and try to convince him to join the party. Their work is cut short when Don Keefer arrives at the party and announces that he intends to set Jim up with Maggie's roommate Lisa.

Will finally joins the party and is convinced by Sloan Sabbith to flirt with a stranger. That stranger turns out to be gossip writer Nina Howard. Their flirtation quickly turns bad when Will takes ethical issue with the story that Nina is writing and begins to criticize her in an attempt to "civilize" her. Instead of the encounter ending with a kiss at midnight, Nina throws her drink in Will's face and storming off.

The next morning the entire exchange is chronicled on Page 6 of The New York Post. The staff meet and decide to pursue stories about misrepresentation; particularly of both The President's gun control record and his diplomatic trip to India.

Lisa anxiously prepares for a date with Jim. Despite her own feelings for Jim, Maggie calms Lisa and convinces her that she should go. Will is set up for a date of his own, with Sloan's friend Carrie. He brings her back to his place, where she offers him a joint. while looking for it in her purse Will finds her loaded gun. Will tries to "civilize" Carrie for carrying the weapon. He unloads it and demonstrates the dangers of carrying a gun.

On set the next day, Will informs Sloan that the date did not go well. Sloan warns him to keep a low profile because Carrie is crazy and jealous. After the show Will goes on a date with Monica, a Senate staffer. He finds out that she's also a fan of gossip news. He cannot resist attempting to "civilize" her as well; ending the date prematurely with another drink thrown in his face. The entire incident again appears on Page 6 of The New York Post.

Don tells Maggie that Jim and Lisa are going on a second date despite Jim's claims to the contrary. Don tricks Maggie into calling Jim and then calls Lisa's phone. Maggie hears Lisa's Rod Stewart ringtone in the background, and realizes that she is sleeping with Jim.

On Saturday morning Charlie Skinner calls Will into the office because Nina has published an expose of Will's date with Carrie on the cover of TMI. Maggie and Jim argue in front of the staff over Jim's lie. Jim punishes Maggie's insubordination by putting her on the assignment desk for the day. While trying to do damage control from Will's week of debacles, Charlie figures out that it is Leona Lansing setting Will up in preparation for firing him over attacking the Tea Party.

Maggie breaks up the meeting to announce the shooting of Representative Gabrielle Giffords. During the show's coverage, a false report spreads on Fox, CNN and MSNBC that the Congresswoman is dead. Reese Lansing charges into the studio to convince Will to report her death but Will refuses. Moments later reports that she is alive and in surgery are confirmed. 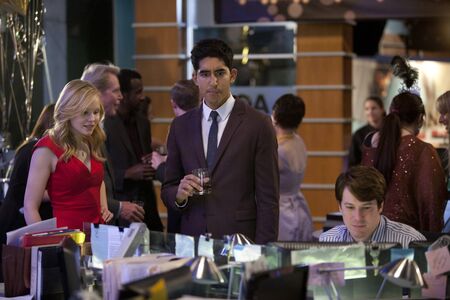 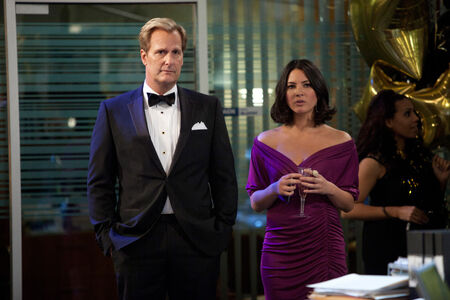